WHAT YOU NEED TO KNOW ABOUT THE VOLCANOES PARK 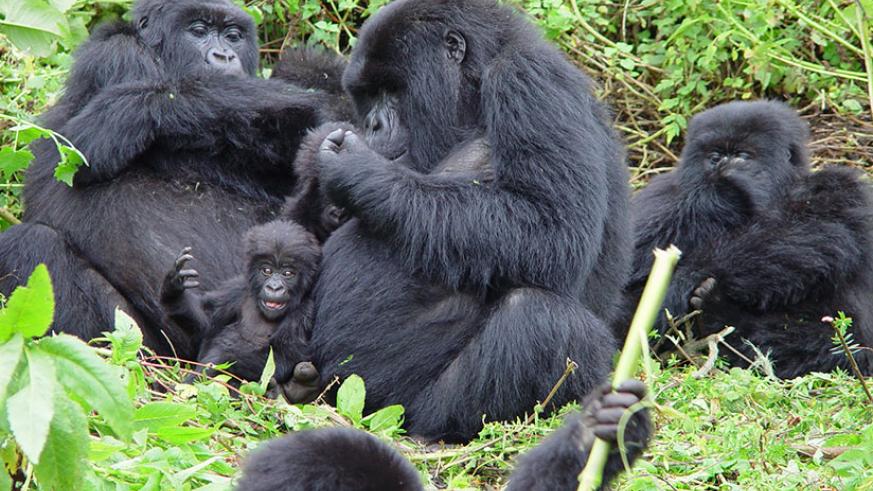 Volcanos national park in Rwanda is among the only three countries in the world with the existence of the mountain gorillas (gorilla beringei beringei). The gorilla specie is one of humanity’s closest relative, as it holds 98% DNA like of a human.  Gorillas are the largest primate species living currently, with being regarded as the endangered species by the IUCN by 2018, a view of these gentle primates is truly worth for every safari.

Located in the western region of Rwanda, volcanos national park is the only national park in Rwanda  that in habitats  the endangered mountain gorillas. The gorilla population in the Rwanda has continued to grow despite the challenges faced in the conservation unit.

While on the trek of the mountain gorillas in Rwanda, one is ought to buy a gorilla permit before the activity. This permit costs $1500 for the visitors. This national park has different gorilla families, with different character traits, behaviors, and their indifference in the history and lifestyle shows their uniqueness in beauty to those that explores them

Volcanos national park has about 11 gorilla families distributed around the slopes of mountains within the national park. These include as follows.

This is one of family with interesting history of its members that you wouldn’t want to miss out on your Rwanda safari. The group derived its name from the former leader called Titus; he was born during the times of Dian fossey research. Unfortunately Titus lost his family members due to poaching; this led to his infant suffering due to the fact that he was born an amateur, and had difficulty in breathing.

He was later taken on by another family that protected him and conserved him till he was old enough. Titus in the later years joined with another silver back called Beetsme to form their own group that was joined by other females that led to its expansion.

In 1991 Titus challenged Beetsme which led into a conflict that left Titus with victory; he led the group till 2007. An ancient happened where his son kuryana broke away from the family and flee to join another gorilla group.

Titus died at the age of 35 years a natural death .The Titus family is one of the strongest and humble families of the volcanoes, it is currently used for research and can only be trekked, if there is shortage of the gorilla permits.

The Titus gorilla family is a small family that resides at the slopes of mountain karisimbi and mountain Bisoke.

This is the largest gorilla, family in volcanoes national park with above 30 individual members. The Susa group is a special group as it was a group that was studied by the historical Dian fossey during her conservation research at the karisoke research centre.

Susa family is blessed with twin gorillas by names of Impano and Byishmo, this group is a must visit for every Rwanda Gorilla safari.  The Susa gorilla family derived its name from river Susa, which flows through the area where they call home.  This family is also referred to (Susa A), as there was a split that led to the reduction of its members and the formation of (Susa B).

The karisimbi gorilla family is the group that broke away from the Susa gorilla group to form the Susa B. It broke away with 13 members in 2009, and in 2010 its name was changed to Karisimbi. This group is led a silver back called Nyagakangaga; they reside at the high slopes of mountain karisimbi near its caldera.

The term Amahoro is translated as to mean “peace “from Kinyarwanda, this group is generally peaceful as its name suggests. Its gentleness has it cost members, as it usually loses members to the aggressive attacking gorilla groups.

This family is located at the slopes of Mount Bisoke, and it is also hard trekk due the raged terrains that led to the area of stay. Its group is led by Ubumwe, whose name means togetherness, as the character and peacefulness the family members present.

This group is also referred to as group 13; the name came about since the initial group consisted only on 13 individual gorillas. The Agashya group was first led by Nyakarima, a silver back that was over thrown by Agashya who is the current leader of the group.

The name Agashya means news, as it was news for the over throw of the previous to the taking over of the current leader of the group. This gorilla family shelters near Mountain Sabyinyo, at their spot the Sabyinyo gorilla family can also be spotted.

The sabyinyo gorilla family is among the easily trekked gorilla families in volcanoes mountains. This family is resides at the slopes of both mountain sabyinyo and mountain Mgahinga, mount sabyinyo is amount the chain mountains that are shared by three countries of Congo, Rwanda and Uganda

. It was initially known as “Amavubi” in Kinyarwanda which is translated as wasps; this gorilla family has the largest silver back that is referred to as Guhonda, who weighs about 220kg.

Despite the fact that the sabyinyo gorilla family was hard to habituate in volcanos national park, this gorilla family is more easily trekked due to its nearness and accessibility.

This is one on the interesting gorilla families of Volcanoes national park, this gorilla group derived its name which means “wisdom” from the dominate silver back called Bwenge. The Bwenge gorilla group is special as some of its members featured in the 1988 “Gorillas in the mist “filmed by the late Dian fossey.

The Ugenda gorilla family is known for the continuous movements around the national park, the gorilla members of this group don’t stay in one place. They were named “Ugenda” which means mobile as their character portrays.

A trekker shouldn’t be worried to visit and trekk this family, since the park has experienced guides that can easily locate the gorillas. The Ugenda gorilla family resides at the slopes of mountain Bisoke, and its one family that very one must see on their gorilla safari in Rwanda.

This group is believed to have originated from the democratic republic of Congo into Rwanda under a leadership of a silver back. This gorilla family derived its name from its former leader Kwitonda.

Kwitonda lost his life by a natural death in September 2012, before his death he dispeared from all his family members and was later discovered dead after 10 days.  Akwarevuro later on took over leadership for the Kwitonda gorilla family after the death of its formers leader.

The Kwitonda gorilla family is the second largest family from the Susa family in the volcanoes national park. This family leaves mountain Gahinga and Mountain Sabyinyo.

The name Umubano means “togetherness”, the Umubano gorilla family was formed due to the instabilities from the Amahoro family were it broke off from under the leadership of Charles. There were fights between Ubumwe, the silverback leader of Amahoro and an emerging Charles who wanted his own freedom and family.

Charles later on won and started his own gorilla family with two females from the previous group. Due to the gentleness and intelligence of Charles the leading silverback, the Umubano gorilla group is well doing gorilla family that very visit shouldn’t miss out on their Rwanda.

Hirwa meaning the “lucky one” is truly a lucky gorilla family in the volcanoes national park. By the leadership of munyinga who broke awake from the Susa gorilla group, the Hirwa gorilla family was formed. Munyinga was chased away from the Susa family because the was constantly mating with the groups females.

He broke away with two females and acquired other members on their way. This group is regarded as lucky, since it acquired a set of twin gorillas in 20122.  This is the mostly liked and visited gorilla family in the volcanoes national park, due to its near location and short time for trekking.

Gorilla families in the different gorilla destinations are the ones that make the gorilla experience wholesomely pleasant due to their interesting characters and behaviors. If you are to think about a gorilla safari, Volcanoes national park is the number one destination to book.