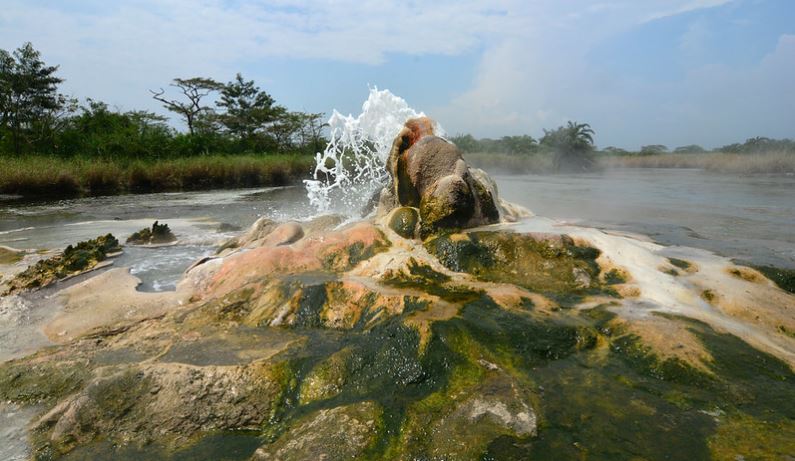 Sempaya hot springs are found in two places in the national park; it first hot-spring is called ‘bintente” male and the second hot is called “nyasimbi” the female. These springs form a steamy evaporating view that’s from the 103 degrees boils from the pool of waters.

The Sempaya female hot spring it is a 30-minute trek to the male spring; it is so hot that it even enables a boil of an egg for the hungry trekkers. The word Sempaya was driven from a Kiswahili word “sehemu mbaya” meaning a bad side.

The story of differentiating the Sempaya hot springs into male and female came from the Bagama people.

The male Sempaya story came as long time along. Some women went to fetch water and found a hairy old man welding his spare, he scared these women. In response, they went out to the village and reported the presence of this man. This unfortunately led to his welcome into the village! He was taken to the village and was given a woman called nyasimbi.

One day this old man went for hunting in the bush but never came back. In the search for him by the villagers, they came to find only his spare at the spring and called it the male spring.

On return to report to the wife, she was not home. So, a search for her by the Bagama people was conducted. They only found  her clothes at the springs hence naming them the female spring.

Also, the breathing view of the thick green forest on your trail to the hot springs, gives a chance to the view of primates such as, the white colobus, red-tailed monkey, grey-cheeked mangabey.

And for the bird lovers is a sight of hornbills, yellow throated tinker bird, honey guide greenbul and red-rumpled while on your fun and exciting trail to the hot springs.

Besides the Sempaya hot springs, the national park is endowed with other attractions worth exploring.

While at the view of the gorgeous Sempaya hot-spring, tourists can also experience a 6km trek on the Ntandi road. This road leads to an encounter with the Batwa people that show case the culture and lifestyle.

The bird life of Semuliki national park has been a great attraction to bird lovers. The park is home to 400 bird species that are located in the swamps and forests of the park. The park holds 60% of Uganda’s bird population in its area.

A sight of a number of wildlife species in Semuliki national park can be experienced. The park is home to about 60 mammal species. These include the African Buffalo, hippos, leopards, African elephants, the endemic flying squirrel, duikers and number of primate species such as the Mona monkeys to mention but a few.

Others in brief are; guided nature walks, game drives.

Would you like to plan a trip to Semuliki National park with us? Contact us here today and we will be happy to help.