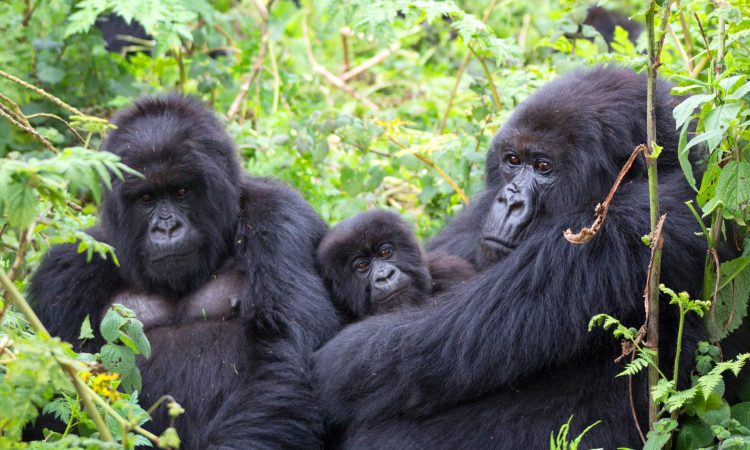 Gorilla trekking is an activity where tourists interested in the primate apes of the mountain gorillas, go on hike through the jungle trekking to the witness the endangered mountain gorillas in their natural habitants

Mountain gorillas are endangered primate species as listed by the international union for conservation of nature, due to poaching, diseases and loss of habitant.

This sector of Bwindi has three habituated gorilla families that include:

This  gorilla grouprilla family was first trekked in 2012 with 23 individual gorillas, with the leadership of Tibirikwata. Oruzogo gorilla family derived its name from the plant species that was situated where the family was first sighted. This family is uniquely gifted as it once had a twin birth in 2013 by kankonda female gorilla. This family has the most joyous and fun members offering a lifetime experience to its visitors on their gorilla safari.

The Bitukura is the only gorilla family group that was headed by the youngest silver back called Ndahura, he led the group for four years and after he died. He got the leadership from karamuzi who served the family and died after the 40 years of service. This group lost members as some left and joined other groups, but still gained more members with the new births from the adult females.

The members of the Bitukura family include kadogo, kabandize, Twakire, mugisha, Obia, Kamuga, Buhara, Betina, Rukara, karamuzi and Ndahura. This family currently has 14 members that can be witnessed while on your gorilla safari in the pearl.

This gorilla group faced many challenges for it members, from the loss of members to other groups to death of its members by tragic deaths. This family faced a hard one when its leading silverback died from a lightning struck in April 2015 on 7th.

Despite the many challenges and split ups, this family is still available for trekking on every gorilla safari in Uganda.

The trekking of the mountain gorillas in this sector begins with a briefing at the parks headquarters, get to know about the does and don’ts while trekking the gentle. And always before any trekk one is required to buy and book a gorilla permit to avoid disappointment since the demand is always high especially during high seasons.

Gorilla trekking in Ruhija gorilla sector is not the only available activity for the tourists, other activities such as birding, community walks, nature walks, gorilla habituation and the cultural encounter of the Batwa community.

For those that plan a gorilla safari to the pearl of Africa, Bwindi impenetrable national park is the top mountain gorilla destination in Uganda besides Mgahinga national park. With its four sectors of Ruhija, Buhoma, Nkuringo and Rushaga, this park is surly the place to be for gorilla lovers.