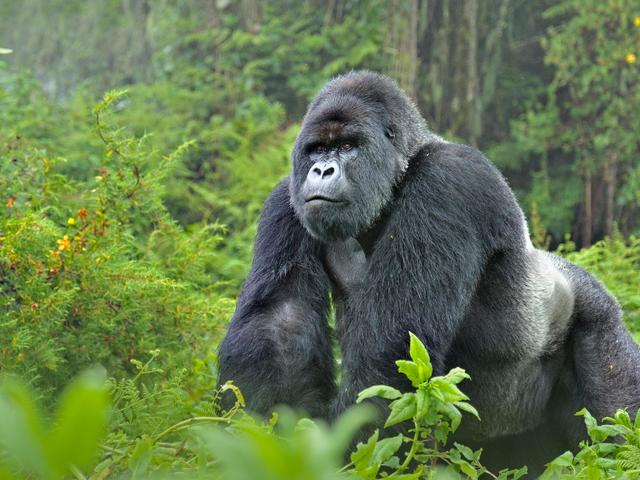 Gorillas are the largest living primates in the world.  Having the closest DNA results as close to that of humans, these are regarded  as man’s closest relative similar to the bonobos and chimpanzees.

These ape primates are threatened by poaching, habitant loss, war and unrest especially in the D.R.C and diseases for instance the “Ebola outbreak”. These factors led to the reduction in the population of the eastern gorilla species.

The presence of the eastern low land gorillas in the eastern forests of the Democratic republic of Congo, specifically in Kahuzi Beiga national park and Maiko national park. This has led to the trekking activities in these areas that have created employment to the local people, such as rangesr and a source of revenue through foreign exchange to the D.R.C government.

Trekking of the eastern low land gorillas is a unique experience; given the fact these species are endemic to the D.R.C. This country offers the lowest trekking rates  for the tourists interested in gorilla trekking.

This is usually put in comparison to  the gorilla destinations of  Uganda that are located far from the capital, requiring a long travel time.

In Uganda, the mountain gorilla sub specie is trekked in the national parks of Bwindi impenetrable national park and Mgahinga national park. These protected are located in the south western region of Uganda.

And  in the Democratic republic of Congo, the mountain gorillas are found in the mountains of Virunga national park, an area that is part of the Virunga Chain Mountains.

Gorilla safaris in the view of the eastern gorilla species, is truly and exceptional experience. These species are unique in the physical attributes, social lives and behavior.

The eastern gorilla species are worth a glimpse on every African safari. These can be witnessed through gorilla trekking or gorilla habituation. Gorilla trekking in around east Africa , has been made favorable for all travelers due to the discounted rates that have been set up to attract more tourists to the gorilla destination during the COVID-19 pandemic .

On a gorilla safari, to sight the eastern gorilla species to the preferred destination, an experience with these gentle species is for a lifetime. A sight of the different members of groups interacting with one another and the surrounding is truly a breathtaking moment.

Witnessing the human like gestures, movements, feeding, playing, mating and many more on safari, is an experience not to miss on every African safari.